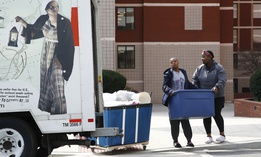 3% of Americans Moved Due to the Coronavirus Outbreak
sponsor content

3% of Americans Moved Due to the Coronavirus Outbreak
sponsor content

Mississippi is planning to expand its use of ‘TalkingTiles’ to help ALS and Alzheimer’s patients.

An app has changed the way young people with autism and developmental disabilities in Mississippi can communicate and grow.

The app—called TalkingTiles—is being used in the Mississippi Adolescent Center, which is part of the state’s Department of Mental Health. Many of the center’s patients have autism and are nonverbal, Donna Horton, director of client services for the center, said in an interview. The app is a way for the children to communicate what they want without using words, like choosing what to eat for a snack.

They can use the app to develop a range of skillsets from math and reading to learning about colors and how to recognize signs, Horton said.

“The kids fell in love with it,” Horton said, adding, “It’s only limited by the imagination of the educator.”

The center’s caregivers can use it, for example, to show patients what their schedule for a specific day would be, given that children with autism and intellectual developmental disorders do better with structure and routine, she said. Nurses can explain where they are going, and they might have a picture of a doctor’s office, for example.

Through using the app, there has been a reduction in children who are misbehaving, Horton said. Kids don’t have to behave poorly to have their needs met.

“I mean, the really cool thing about TalkingTiles with my population is we’ve seen a decrease in the maladaptive behaviors,” she said.

The app operates on Microsoft Dynamics CRM and is a Caretiles application from CoCENTRIX, a company that works to find solutions for the health and human services community.

The tiles surface as different pages in the app, said Bill Keyes, senior vice president of marketing and sales for CoCENTRIX. They could be videos, pictures or words and patients can use them to communicate.

The idea is to engage patients with apps that tie into their specific care plan and let’s them engage in their recovery process, Keyes said. It is also individually designed for different types of patients, he said, in order to cater to their needs. Keyes said it’s comparable to Windows 8, but with tiles.

Mississippi is getting ready to expand the app’s reach statewide and plans to implement it with the Department of Mental Health’s ALS and Alzheimer’s unit later this year. With ALS, Horton said, a person’s ability to speak decreases over time. With the app, there are hopes that more people could use it to help them communicate.

A patient’s progress is also tracked so that a patient’s group of caregivers can see their progress and determine the next step, Keyes said.

Another goal of the app is that states can save money on long-term residential care for patients which can be costly. Patients are also given the chance to become more independent.

The tablets that patients can use to access the app are provided by the center, Horton said. The state pays for an annual license for the app, she said, but for patients wishing to continue using the app after the program, there is no cost for the first three months, and after that, the cost is low.

“It’s a program that these individuals can finally have a voice and a say and a choice in their own life,” Horton said. “And it’s limited only by your own imagination.”

Allison Prang is a journalist based in Columbia, Missouri. She has written for The Wall Street Journal, Bloomberg News and The Kansas City Star, among other news outlets. Follow her on Twitter at @AllisonPrang.